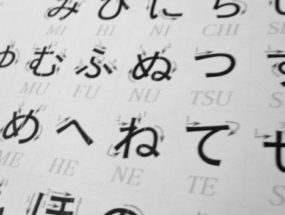 English alphabet consists of 5 vowels and 21 consonants, which makes 26 letters in total.

Japanese alphabet consists of 5 vowels and 14 consonants (some think more than 14, depending on how to pronounce each consonant), which makes 19 letters in total!?

Actually, it’s a little more complicated than that. Japanese alphabet is made up of a combination of 1 consonant and 1 vowel, which means the total will be more than 70 (5 vowels times 14 consonants)!

Still looks too much?

Japanese alphabet is very structured unlike English, so if you remember all the vowels and the consonants with a few exceptions, you can say all alphabet easily.

Each vowel is pronounced as follows:

Let’s take a look at how it works.

As I said earlier, it will be all combination of 1 consonant with 1 vowel.

This applies to all the consonants except “Y” “W” and the last “N.” The “Y”and “W” have fewer vowels to make up letters and the last “N” doesn’t go with any vowels.

In total, there are 46 letters in Japanese alphabet.

Here is a chart of Japanese Alphabet.

You might notice a couple of things from the chart.

First of all, yes, we write from top to bottom and from right to left. (We also write just like English.)

Here is how we Japanese learn this chart at school.

Once you memorize these letters, all you have to do is to change the vowel to “i” “u” “e” “o”respectively.

Second, did you notice some letters have parentheses? I wrote letters based on the rules I explained first, then wrote how we actually say or write in parentheses. As you might already know, there is no difference between L and R in Japanese. We don’t distinguish when we say “wrong” and “long” or “right” and “light.” I’ll talk about these sounds that don’t exist or are different in Japanese language more later.

Finally, did you find “G” “Z” “D” “B” and “P”? These are not on the basic alphabet chart because they are extension of the basic chart. I will talk about them in How Many Letters are in Japanese Alphabet? (Extension).