Public Transportation is very different among these three countries I have lived.

Each has pros and cons, so let’s look at differences in Convenience, Punctuality, Cleanness, Busyness, Usability, and Cost from my experience.

I only know Toronto, Canada; New York, U.S.; and Tokyo, Japan; but here is the number of train/subway lines in each city.

Yes, you can go anywhere by train or subway in Japan, especially in Tokyo. The map looks like this: 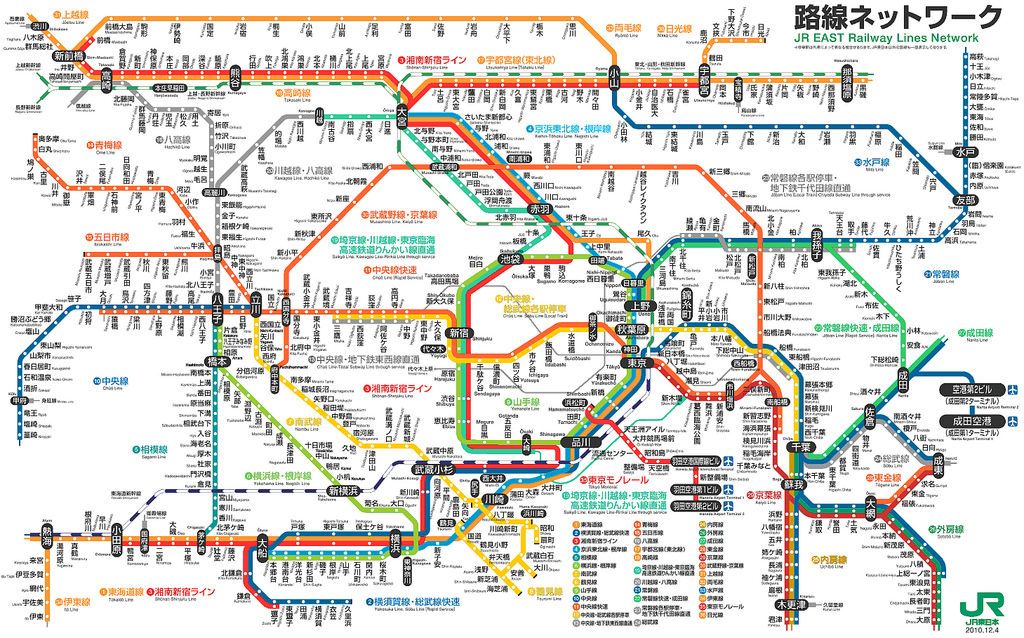 I know it looks crazy, but it is so easy for you to walk around the city without driving.

When I lived in Toronto, I always used subway and bus or streetcar to get to my destination. It is almost impossible to do so only by subway or train since there are only 4 lines in Toronto. Luckily, I lived 10 minutes away from the subway station, so it wasn’t that bad. In New York, you can go almost everywhere by subway, so it is just like Tokyo.

So for Convenience, I would say Tokyo and New York are the winners, followed by Toronto.

There is an obvious winner in this category. Of course, it’s Tokyo!

I remember TTC (Toronto Transportation Committee) has timetable with the first and last train times and says “every 2-3 minutes during rush hours and every 4-5 minutes outside rush hours” or something like that. But of course it usually comes more than 5 minutes after the previous train. Since I lived close to workplace, I didn’t have that bad experience while I was in Toronto, but a lot of people were complaining about TTC.

MTA (Metropolitan Transportation Authority) has a little bit more detailed timetable than TTC, but after certain period of times, they also say “every 10 minutes until…” There are more lines in Manhattan, so of course, depending on the line, schedule is very different. I’m from Japan, so I found that MTA is very easy to use since each line is color-coded.

So, how about Tokyo timetables? You can see the exact time when the train comes on the timetable. And what’s more, they most definitely come on time. It might be difficult to get used to Japanese transportation system, but once you know how to use travel planner tool which is available even in English version, it won’t be as hard as it looks.

This has another obvious winner…. Tokyo, of course!

People who have been to Japan always say how clean Japan is. This is one of the things I miss about Japan. But actually, the area where I currently live (Norfolk, VA) is pretty clean everywhere I go, so I’m very happy.

TTC used to be very dirty, but during the last year of my stay, they launched new models for subway, so it got a little bit better. Of course, it got dirty soon again though.

MTA could be the worst when it comes to cleanness. It just smells so bad and is very dirty.

You might have seen some videos of train staff pushing passengers into the train in Tokyo. Yes, that is real and it feels awful when you’re one of the passengers being pushed.

When I went to Toronto for the first time, I was so surprised that nobody was running or rushing into the train! When the train is at the station and you’re just got to the platform, most Canadians let the train go and wait for the next one even if the next one might not come on time. On the other hand, Japanese people run to catch the train in front of you even if the next one is coming in a few minutes on time.

New York can get as busy as Tokyo, but you never see station staff pushing passengers. You don’t see a lot of people running towards the train either.

So for Busyness category, Toronto is the winner, then New York, followed by Tokyo.

I would say Toronto has the simplest system among the three countries with unique monthly subway/bus/streetcar pass called Metropass which is plastic and easy to swipe.

MTA has simple system but just as busy as Tokyo. Its monthly pass, Metrocard, is paper and hard to swipe.

Tokyo has the most complex system but coolest train/subway card with IC chip. You don’t have to insert or swipe the card. You just need to wave it over the reader. You can use the train/subway card at so many different stores just like you use your credit card. I’ve never tried, but I heard that you can even use your cellphone as train/subway/credit card in Japan.

It is difficult to compare in Usability, but if you focus on how user-friendly the system is, I would say Toronto is the winner, then New York, followed by Tokyo.

Fare for subway and train in Tokyo is based on distance unlike TTC or MTA. So the longer you travel, the more it costs.

For Cost category, I would say Toronto and New York are the winners, followed by Tokyo.

As I said earlier, each has pros and cons, so if you want to get to the destination on time, for example, Tokyo has the best system for that. If you want more cost efficient way to travel around, New York or Toronto has better system. If you are germophobic, you should visit Tokyo. Depending on what your priority is, a country with the best public transportation might change, but I think each city has developed the best system for itself.