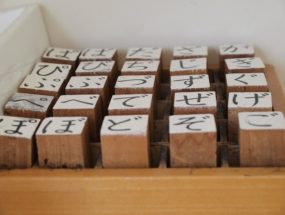 I introduced basic Japanese alphabet in my article, How Many Letters are in Japanese Alphabet? (Basic), so I’m going to talk about the extension today.

As I mentioned earlier, “G” “Z” “D” “B” and “P” are considered different because they’re like a family of basic consonants, “K” “S” “T” and “H” and called “Dakuon” or “Handakuon,” which means voiced sounds.

So if you see this symbol, that means the letter has voiced sound, but they still follow the rules of Japanese alphabet.

These consonants usually have own charts:

This looks much simpler if you know Hiragana or Katakana. Here is a reference to see how structured Japanese alphabet is:

Now you know all the alphabet both basic and extension. Once you learn how to pronounce each letter and how to write Hiragana and Katakana, your Japanese study is going to be much easier. I know there are a lot to remember, but just like English alphabet, these are must-know elements to learn Japanese, so please memorize vowels and consonants along with “combination” rules as a first step.

There are a few more things to remember about Japanese alphabet, but I will talk about them in a different article.